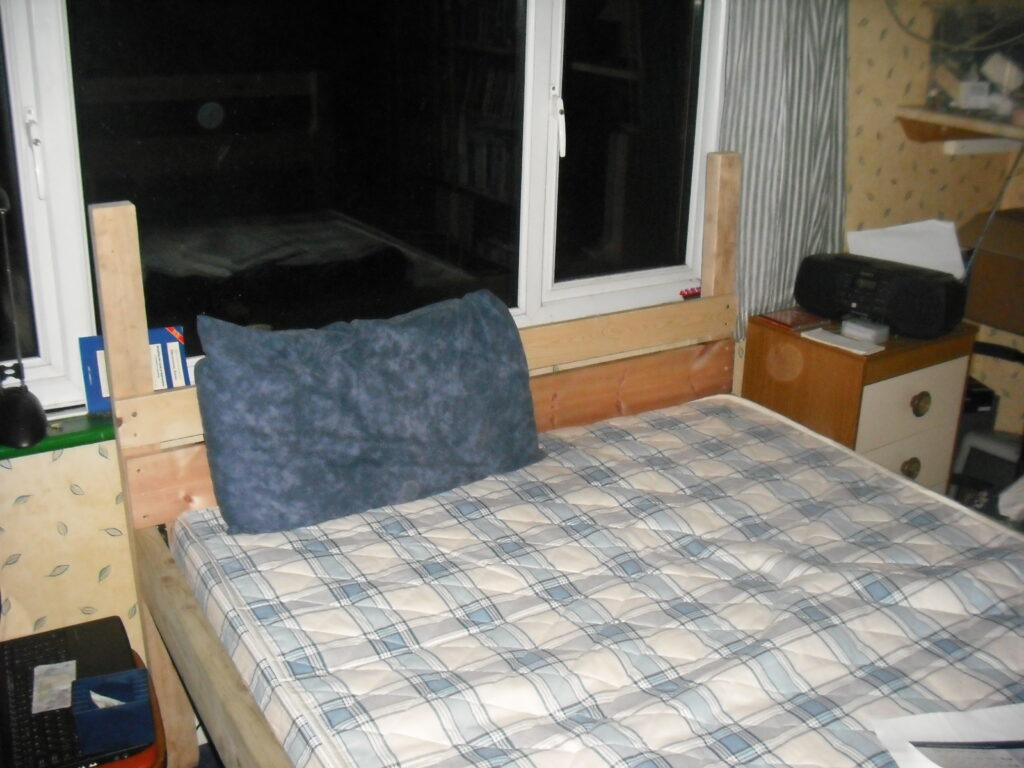 About 11 years ago I was sleeping on a cheap wood framed single bed until one of the bed frames broke. It had a weak spot at a knot and it split diagonally at that knot which meant a replacement was needed.

I decided that I would build a replacement bed which would be stronger and taller than the old one, and have a double mattress on it.

Back then, I made some design changes that I thought would work well, such as using lock together fittings that would make sure the legs would be assembled to the frame in parts so I could build it outside the room and assemble it in the room when done. Unfortunately, making each leg independent meant the legs dropped off each time a piece was assembled.

In the end, I used thin metal brackets to lock the legs in place. Additionally I used wooden floorboards for the head and foot boards as well as to support the mattress. Unfortunately, this also created a problem that the bed frame would rock from side to side slightly and the headboard would bash the window sill when climbing into bed. The side to side rocking was solved by wedging my desk against the bed.

Since I built the bed frame with 600cm of clearance underneath, it made under bed storage much easier and in the early days, the single mattress was stored under my bed.

We were fostering at the time, and our foster child used to play under the bed, and there was plenty of space for him to lie on the mattress under my bed, like it was an oversized bunk bed.

During the 2020 lockdown I was examining the bed frame and there was one leg that I didn’t buy new and that was riddled with woodworm, so it had to go and since framework started to rock sideways it needed a redesign.

I bought a welder and initially started to build the bed frame in metal, which would have made everything easier to assemble and become something I could adapt easier, unfortunately I bought the wrong welder and realised that I don’t have skills in that area, so I gave up with that idea and re-used the metal in a different project.

After replacing the uprights with new wood, I used brackets I bought for the metal frame to make a secure headboard that served a dual purpose, it also prevented the side to side wobble of the bed frame.

Initially, the plan was to use a rail on the footboard to hang clothes that I would use during the week, and keep the rest of the clothes in the wardrobe, but lockdown had other ideas.

I installed a folding desk that would support the computers used for Zoom as well as a projector screen for watching movies at night while in bed.

Above the headboard I installed a shelf for the projector where I could store everything I might need at easy reach.

I replaced the thin brackets with reinforced brackets that meant there wasn’t any rocking action front to back either.

I looked at a professional woodworker’s bed he built with much thicker wood and he fitted the sides to the legs so they slotted in from the side. I did notice that he used extra pieces to support the weight of the sides. He also used a lot of dowels and hidden dowels to join the frame together.

He used 2×4 timber for the slats but that makes the bed much heavier, and if you are sleeping on a concrete floor then the weight isn’t an issue but I sleep upstairs on a wooden floor and don’t want to fall through the floor!

I know what I built isn’t perfect, but for an amateur it works well enough.

I may go with the idea that the professional woodworker used by placing additional legs under the side pieces removing the need for the brackets.